difference in whether a colony survives overwinter or not.  When colonies are light on food stores, feeding a heavy sugar syrup or not extracting stored honey can improve winter survival. It is the best management option to insure the proper fall configuration and promote raising FAT fall bees. To raise Fat bees the colonies need to be FAT with honey.

For improved wintering success, it is important to ensure the brood nest is situated low in the colony before fall ends. Ideally, an ample ceiling of fully-ripened honey will be stored above the brood nest enabling bees to eat their way upward through the overhead stores as winter progresses (See Diagram left). If colony brood nest is still sitting high in the colony mid-Aug/early September, I recommend beginning supplemental feeding soon.

Should honey be fed? Honey can be fed to fall colonies if you know it is from colonies free of disease, particularly American Foul Brood. The easiest way to feed honey is to redistribute honey from colonies that possess heavier stores to those light on stores. Do not rob colonies too heavily when removing honey to extract. You can remove and store honey-filled frames in the freezer and make your extracting decision later in fall or put honey supers on one colony if you wish to treat other colonies for mites.

If you have “junk” honey (honey you don’t wish to extract or honey that has crystallized in the combs), score the cappings to make a “mess” to stimulate the bees to move it into their storage pattern. You can place such frames above the inner cover, or on top of the colony. Some people advise putting such honey beneath the lowest box on the bottom board but this will require some heavy lifting. If you have liquid honey to feed, dilute it with warm water before putting into syrup feeder (honey is best fed in a closed feeder to avoid any robbing by bees from other colonies).

Does it make a difference to feed or what sugar is fed? Data collected last year at PNW Honey Bee Survey (www.pnwhoneybeesurvey.com) 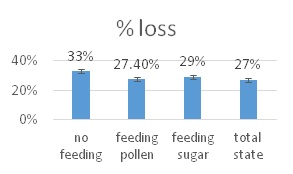 suggested there were heavier loses of individuals who did no feeding of their colonies (33% loss rate) compared to those who did feed (27%) (See graph right). There was no difference in improvement in loss percentage whether sugar syrup (sucrose as cane or beet sugar mixed with water), corn syrup, drivert, fondant or frames of honey were fed (see graph below).  For latest fall and earliest spring  feedings, generally a clean, non-contaminated sugar is recommended.  Some individuals do not care to feed corn syrup (high fructose syrup) nor beet sugar (it comes from a GMO crop). During the active season, sugars with contaminants, (darker sugars, syrups with corn syrup, candy liquefied into syrup, etc) seem to be OK. 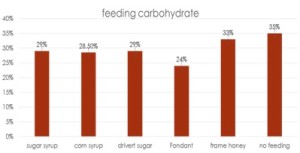 There is no indication that feeding converted sugars (sucrose already reduced to mixture of the simpler sugars glucose and fructose) offers any digestive advantage to honey bees.

Fall feeding of protein does not make for a larger colony nor improve survival. Bees apparently do not store the artificial diet material but if there is a lack of pollen stores (i.e. bee bread) in a colony, fall protein feeding can help insure FAT bees. Feeding pollen patties or dry protein material in an outside feeder does help boost growing colonies and extend the pollen availability. Pollen is not always reachable in early spring with rain and/or cooler temperatures inhibiting flight.

What is best way to feed liquid syrups? Different individuals have different ways to feed and offer different sugar sources. Basically the BEST way to feed is the one you find useful and fits within your budget. You can buy expensive feeders or be inventive and recycle materials to use as feeders. Many simply put the syrup into a recycled jar or can that has a removable lid with tiny holes punched in the lid. One or more feeders can be placed above the inner cover hole, with or without a piece of screen material, or directly onto the top bars of the top box. Three tin cans with removable lids are shown in diagram below to right directly on top of frames. An empty shell should be placed around the feeder and the lid properly weighted to avoid the empty box becoming displaced. It is easy to check and refill/replace such containers when the bees have taken down the contents.

Some feed bees in a common feeder in the apiary (feed lot feeding). I don’t like this method and it isn’t a good method for urban beekeepers since it can lead to a cloud of bees at the feeding site. It seems the strongest colonies are the ones that collect most of the syrup, not necessarily those that need it the most.

I like to drill a hole the size of a plastic jar and put the feeder jar outside the lid (as shown to left).

I can remove an empty jar and replace it with a filled jar before the bees have a chance to occupy the space of the hole. External feeders (shown right) are black to cause less heating of the syrup. Such feeders are available from bee supply companies.

A popular way larger-scale beekeepers use to feed colonies (rather than feed-lot feeders) is with an internal feeder.

They purchase or make their own Division Board feeders and place them at the edge of the box, replacing one or two regular frames (Figure to the left shows a homemade feeder at left of brood box). Most of the larger-scale beekeepers have a tank on their vehicle and a hose delivery system to refill the feeders by simply moving aside the cover and/or boxes on top of the internal feeders and then quickly refilling the feeder. This is less useful for smaller-scale beekeepers because it necessitates opening the colony and without a convenient liquid delivery system refilling can be tedious.  It is advantageous as bees will readily utilize the syrup in such feeders. They should be equipped with a ladder so bees can easily enter and exit and avoid accumulating dead bodies at the bottom.

Feed heavy syrups in the fall. We do recommend that the syrup be mixed heavy in fall feedings. This is to stimulate storage of the material vs. stimulating brood rearing. If you have liquid honey to feed, dilute it and feed in a container feeder within the hive.  Be careful when feeding in fall or during a drought so that you do not promote robbing behavior. Reduce entrances and avoid spilling honey/syrup outside of colonies.

In Oregon you should seek to feed colonies the heavy syrup before the fall rainy season appears. After rains become common, we recommend switching to a dry sugar so as not to add to moisture stress to the colonies. Granulated sugar can be fed in a top rim such as a Vivaldi board or simply poured on the inner cover as shown in left photo. 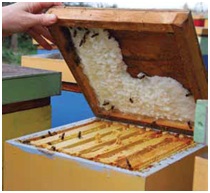 An alternative is to make a sugar candy and place it above the inner cover hole. Alternately you can harden the candy into a rim and then position the candy above the top bars as shown in right photo. Warm moist air from the cluster below will make a slurry of the candy above the bees (or at the oval opening if inner cover is used) allowing the bees to access the candy as they need it. A good alternative is to feed more expensive fondant sugar – it absorbs moisture and will not become as hard enabling the bees to take it as they need it. These forms of feeding don’t add additional moisture stress to the winter colony. Our BeeInformed survey has shown that feeding dry sugar or candy improved overwintering success.

Should food stimulants (such as Honey-Bee-Healthy, Amino Acid boosters, probiotics, etc) be added to sugar syrups when feeding in the fall?  Although they can be good additions to entice the bees into quickly emptying feeders and stimulate healthy colonies, some advocate avoiding adding a food stimulant in the fall. If you are debating the value of such additives I suggest you try splitting your colonies into two lots, feeding one and not the other and see if you see a difference. New additives seem to frequently come on the market, but most, adapted from feeding other livestock, have not been extensively or independently tested for effectiveness or potential harmful effects.

Should you add vinegar or an acid to syrup to bring the pH down to around 4.7?  At one time, using additives to avoid sugar spoilage and mold growth in feeders was the standard recommendation. Those who feel it important to create a more acidic syrup, thought to better duplicate flower nectars (which have a wide pH range depending upon the flower and plant growing conditions) may help the bees intestinal function. Avoid toxic sugars (such as milk sugars lactose and galactose) and avoid salt as a higher salt content quickly turns bees off.

Will feeding sugar in the fall make a difference? Results from the PNW honeybee survey suggested those who didn’t feed lost more colonies than those who did feed. The best advice, try it, you might like the improvement in overwintering in your colonies.