For unknown reasons the Portland-area beekeepers experienced heavier losses than all the other regions of the state this past winter.  This information summarized below was collected at various spring Portland Metro area beekeeper association meetings through the distribution of traditional paper surveys and introduced as an online survey created by the Portland Urban Beekeepers (PUB) as part of their education and outreach goals for the beekeeping community. Overall, weighted average was 48% overwinter loss, double the level of larger-scale beekeepers.

Details – (click image to enlarge) CLARK CO: 17 total surveys. Four of the 17 indivdiuals (24%) had total survival (10 colonies total) while the remaining 13 individuals reported lost of 1 to 8 colonies – total 35 colonies. The median loss of colonies was 2. Fifty-nine percent lost 50% or more of their colonies. 4 individuals (23.5%) lost all their colonies.  Weighted loss = 40%, the best report of the 4 Portland local associations. The median number of years of experience of survey respondents was 4 years (range of 1 to 30.)

TUALATIN VALLEY:  43 total surveys. Ten of the 43 individuals ( %) had total survival (19 colonies total) while remaining 33 individuals reported loss of 1 to 8 colonies – total 84 colonies. The median loss of colonies was 2. Eight two percent lost 50% or more of their colonies. 15 individuals lost all their colonies. Weighted loss was 54.5% (previous season weighted loss rate was 42%).  TVBA survey-respondents managed an average of 3 colonies  with median 3 years of experience (range 1-40 years). 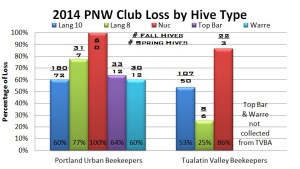 Loss by hive type The graph to the right (click image to enlarge)  illustrates overwintered colony loss by hive type for Portland Urban and Tualatin Valley beekeepers association members (3 hive types only for Tualatin Valley members).  Langstroth 10 frame hives had esentailly similar losses levels (60% for PUB and 53% for TV members) but Langstroth 8 frame hives had triple the lost rate for PUB (77%) compared to TV (25%); number of 8 frame hives was 4 times higher within PUB. Nucs had heaviest losses (100% for PUB, 86% for TV). For PUB members losses of Top bar and Warre hives was nearly the same (64% and 60%). 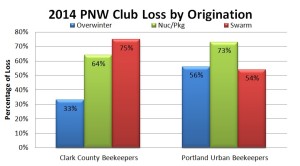 Loss by Origination  For two fo the four groups the graph to the left (click image to enlarge)  shows survival by origination. For Clark County one-third of overwintered colonies were lost while 75% of swarms did not survive. Heaviest losses for Portland Metro (73%) was of nuc and packages.

With the 2015 survey we will have graphics to present for all the groups. A printable copy of this report is availalble here – 2014 Portland Metro Area Bee Losses

For Dewey’s report on commercial/sideliner and backyard beekeeper losses see the ORSBA July 2014 issue of The Bee Line.

I have been surveying local association meeting attendees for their overwintering losses for several seasons. This spring I had opportunity to gather information on loss/colony survivorship at March/April meetings and Bee Schools from 9 groups. 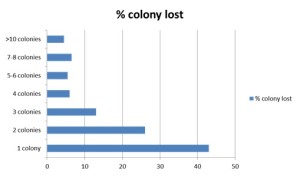 Overall I received surveys from 307 individual beekeepers who began the overwinter period with over 1000 colonies (average 3.4 colonies/individual). 38% of individuals had total colony survivorship while 62% lost one or more colonies. 49% of which lost 50% or more of their fall colonies; 25% lost all their colonies overwinter. Losses ranged from 1 to 20 colonies with; 82% of individuals loosing 1,2 or 3 colonies; highest individual colony lose number was one colony (43.5).  Graph 1 (click image to enlarge) shows number of colonies, expressed as percent of colony loss, and Graph 2 (click image to enlarge) shows survivorship, expressed by percentage of individuals. 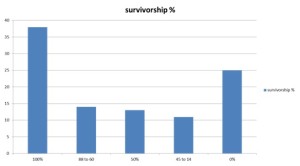 Median colony number entering the 2013-2014 overwinter periodof the 300+ individuals returning a survey was 2 colonies/individual. Those with losses had double the average number of colonies (4.5 vs. 2.4 average) compared to those with total survivorship and a higher number of colonies (801 colonies – range 1-30 colonies), compared to those without losses (260 colonies, range 1-13 colonies). Weighted colony survivorship, defined as loss divided by total returned valid surveys, was 52% – losses were 48%. This loss level is the highest loss level of small scale beekeepers in my 6 years of collecting such numbers (last season, 2012-2013 wintering period, small scale loss level was 42%-survivorship 58%).

The 9 Oregon association groups had average survival averages ranging from 70% survival (Lane Co & North Coast Associations). The three groups in the Portland area all had the highest loss levels – poorest survival rates – see Graph 3(click image to enlarge) . The surveyed beekeepers were asked for an acceptable loss and the mean was 15% – the results show that 39% of respondents had 15% or better, including total, survivorship. 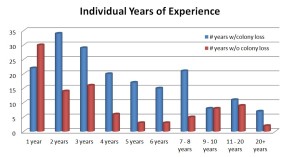 Losses of the larger-scale OR beekeepers was significantly below that of the smaller-scale beekeepers, shown here, as has been the case in each of the past 7 survey years. For report on commercial/sideliner and backyard beekeeper losses see the ORSBA July 2014 issue of The Bee Line.